Around the spring or early summer Supreme Court justices announce opinions when they’ve rendered verdicts in cases heard during the Court’s term.  But the word “opinion” can be misleading.  When we laypeople hear “opinion” we are inclined to think it’s a viewpoint, preference, or idea one has, but odds are it’s not grounded in scholarship and might even be completely baseless.  My opinion is that every Wes Anderson movie is head-and-shoulders better than all the movies out there.  It’s not a statement without merits – I’ve seen all his movies, but I’ve not seen all the movies that were ever made and cannot root my argument in something concrete.  The justices issue opinions but they are very much rooted in concrete fact and scholarship from the Constitution and Supreme Court precedents.  My opinions on movies have the weight of whatever value they carry among my peers and family.  The Supreme Courts’ opinions have the weight of law therein affecting all U.S. citizens.  There’s a big difference.

Opinions come down from the court in a vote count of 9-0, 5-4, 7-2, or some variation that usually* adds up to nine.  The majority and dissenters will explain their reasoning in their own written opinions.  However, in most cases, there will be more than two opinions to read.  A justice in the majority might author a secondary opinion, or a concurring opinion, because he or she agreed with the majority but for a different reason.  Another possible reason for a supplemental writing is that the concurring author may have found a different part of the constitution to support why they agreed with the majority.  It’s important to note that technically speaking, only majority opinions set precedents.  No doubt every word that was written in the majority, dissenting, or concurring opinion was chosen with great thought and purpose.

Concurring opinions may seem redundant, but most definitely are not.  A concurring opinion can often explain more about why the majority decided a case or how the justices wrestled with the constitutional issues embedded within the case.  At times, a concurring opinion may portend a decision on a prospective matter. This information is highly valuable to attorneys who could cater future petitions for certiorari and oral arguments in manners that will appeal to certain justices based on what they alluded to in concurring opinions. Lawyers, litigants, interest groups, and Court prognosticators might use language from a concurring opinion to predict how a Supreme Court case will turn out. 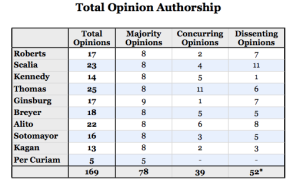 And how did this past term compare to previous terms? 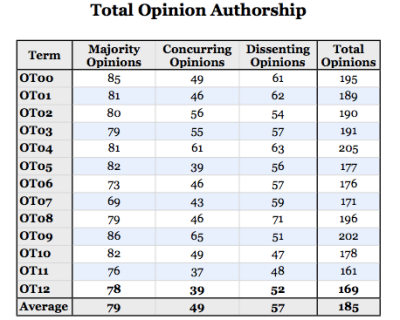 *In some cases, justices must recuse themselves from a case if they had any involvement with parties to the case. For example, Justice Kagan recused herself from the affirmative action case Fisher vs. The University of Texas because she was involved with the case at the lower court level. If this happens, the decision ends up being a variation of eight (5-3, 7-1, or possibly even 4-4).