On the docket is a case called NLRB v. Noel Canning that asks the SCOTUS to clarify the powers a president has, via the Constitution, to fill vacancies in his administration like cabinet positions, federal judges, or executive office positions.  This particular case deals with the latter.  Key to understanding this constitutional interpretation case is knowing that presidential appointments need to be OK’d with the “advice and consent” of the Senate, unless they’re in recess.  You’re picturing Harry Reid and Mitch McConnell playing tether ball outside the Capitol, aren’t you?  Not that kind of recess, but they are away from the Senate floor…maybe playing kickball instead.  The outcome of this case could have quite a significant impact on the interaction between the legislative and executive branches.

The U.S. Supreme Court will hear oral arguments concerning three questions related to the recess-appointments clause of Article II Section 2 of the Constitution:

A labor dispute over a collective bargaining agreement allegedly made verbally between Noel Canning, a bottling and distribution company, and the International Brotherhood of Teamsters Local 760 was brought before the federal National Labor Relations Board (NLRB).  Empowered by law to enforce the provisions of the National Labor Relations Act, the board in February 2012 ruled against Noel Canning in the labor dispute.  The company filed suit in federal court arguing that President Barack Obama filled three vacancies to the board that had ruled against Noel Canning without Senate approval.

Article II Section 2 of the Constitution provides the president with the power to make appointments absent Senate confirmation in a specific situation: A recess of the chamber.  “The President shall have Power to fill up all Vacancies that may happen during the Recess of the Senate, by granting Commissions that shall expire at the End of their next Session.”

The issues before the Court in this particular case revolve around the timing of the origin of the vacancies on the NLRB and the status of the Senate at the time of the appointments.  Does a vacancy have to originate during the Recess, as the clause seems to express? Should “recess” be defined as “a period of cessation from usual work,” as the Obama Administration will argue, or the time period between the formal conclusion of one Senate session and the commencement of another, as the Noel Canning Company lawyers will state?  Were the informal “meetings” of the Senate agreed to in a bipartisan vote unanimously by the Senators—where a gavel was struck every three days to symbolize the Senate was not in formal recess—a high enough threshold to conclude that the chamber was not on a “break?”  Does the president determine when the Senate is out of session or does the chamber?

The Obama Administration seems to have a high hurdle to overcome in order to be successful in this case.  Utilizing the words of the Recess Clause of the Constitution (see above), the written exception for confirmed appointments in Article II specifically references “the” recess of the institution not “a” recess.  Under the definition argued by the White House, a break for dinner or to go home for the evening to sleep could be interpreted to be “a period of cessation from usual work.”  In addition, Article I Section 5 of the Constitution expressly empowers “a smaller number” of either chamber of Congress to “Adjourn from day to day,” as had been done by the Senate in their once-every-three-day meetings when the appointments were made to the NLRB.

Decision: 9-0 invalidating the President’s appointments. Mr. President, consider yourself checked by the judicial branch. Blammo. In the majority opinion, Justice Breyer concluded that the Senate is in session when it says it’s in session and, as such, the President cannot use the illusion of a recess as an opportunity to exercise his appointment powers. The majority went a step further by declaring the constitutional meaning of “’the recess’ includes any recess of 10 or more days, whether inter- or intra-session recess.”

In a sharp concurrence written by Justice Scalia (joined by Roberts, Alito, and Thomas), one that sounded in Court more like a dissent, they agreed only on the premise that the appointments are invalidated. Bothersome to the “dis-currencers” was the articulation of the new rule of ten days in order for the Senate to be in recess. “These new rules have no basis whatsoever in the Constitution; they are just made up,” he said. Perhaps he found this judicial rule making a tad hypocritical for a branch of government tasked with deciding the powers and limitations of the other two branches.

Why teach/care about this case?  For those who find questions about the separation of powers fascinating, this is a great opportunity to highlight a modern example of limits placed on government branches and the fact that checks and balances are not theoretical constitutional principles but are practical applications today.

Like we said earlier, the outcome of this case did, in fact, have an impact on the interaction between the legislative and executive branches.  Keep in mind, in the fall of 2013 the Senate went “nuclear” changing the confirmation of presidential appointments, except SCOTUS vacancies, so that less senators are needed to confirm appointments like members of the Labor Relations Board.

For more info on this case we like Carolyn Shapiro’s video (below) and the coverage on SCOTUSblog’s site here. 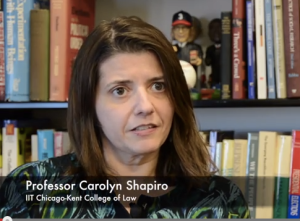