Questions in this case and 5-cent rundown: Did two Secret Service agents – Tim Wood and Rob Savage — violate Michael Moss’ 1st Amendment rights when they forcibly moved him and a group of anti-George W. Bush protesters, but not a group of pro-Bush demonstrators, away from a restaurant where the president was dining? Second, should the agents be protected from such a lawsuit, which could result in having to pay damages, as a result of the “qualified immunity” status given to Secret Service who are tasked with protecting presidents? 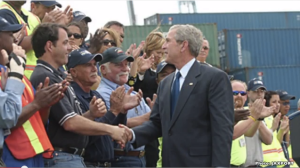 10-cent explanation:  In the fall of 2004, shortly before the Bush-Kerry presidential election, George W. Bush and First Lady Laura Bush decided to dine at the Jacksonville Inn in Jacksonville, Oregon.

Knowing the president would be stopping through the town, Michael Moss and a group of 200 anti-Bush protesters, gathered outside the Inn’s restaurant to resume their demonstration.  A group of pro-Bush demonstrators assembled across the street from Moss just as the president and his wife sat down to dine on the outdoor patio.  As the brief filed by Moss’s attorneys states, the two groups were equally positioned relative to the location of the Inn.  Both groups watched the presidential motorcade drive into the Inn, but it was once the president and his wife moved to the restaurant patio that removal of the anti-Bush group happened.

Michael Moss and the anti-Bush protesters were forcibly moved by Secret Service Agents, including Wood and Savage, two blocks away from the entrance to the Inn. However, the pro-Bush demonstrators were allowed to remain on their corner.  Moss alleges this amounted to “viewpoint discrimination” on the part of the police, who were acting on orders from Bush’s Secret Service agents, and thus a violation of his 1st Amendment free speech and protest rights.  After dinner, the pro-Bush group got to watch the President’s motorcade one last time as he departed Jacksonville, leaving the anti-Bush group without the same opportunity.  The multigenerational protestors claim this once again denied them the ability to direct their anti-war messages at the President, their intended target.

This case isn’t just about the limits of 1st Amendment free speech rights; the petitioners (the two Secret Service agents) must also address the financial damages Michael Moss is suing them for.  Moss claims the protest turned into a riot after local police used “excessive force” when they shot plastic pellets at the anti-Bush protesters.

This case reminds us of the 1st Amendment area of law that we recently covered in the Massachusetts abortion protest case McCullen v. Coakley:  viewpoint discrimination.  In other words, Moss believes his group was forcibly moved by government agents because the content of their speech was clearly anti-Bush, whereas the other group was allowed to stay because their speech was supportive of the President.  While the two cases split on almost every other detail, both raise a good question about free speech at protests – Do speech rights protected under the 1st Amendment include a right to get close enough to our intended audience so that this audience can hear our speech?

The U.S. government, led by SCOTUS oral argument veteran and Solicitor General Donald Verrilli, wants this case dismissed on the grounds Secret Service agents have qualified immunity and therefore cannot be sued for doing their job.  The government is prepared to argue that the president’s last minute call to dine outside, in a less secure patio area, rather than indoors (obviously safer and prefered by Secret Service agents) necessitated moving the anti-Bush group as a matter of safety.  By October of the 2004 presidential election, political tensions were elevated with recent U.S. intervention in Iraq heightening safety risks to Bush.  In his arguments, Verrilli will likely ask the Justices (perhaps more articulately), “Look, if your job as an agent is to lessen the risk that you’ll have to take a bullet for the President of the United States, who are you more likely to expect a bullet from and accordingly move? – The pro-Bush or anti-Bush group?”

The U.S. government found some support in a lower court decision from Judge O’Scannlain writing for the U.S. Court of Appeals for the 9th Circuit who said “In effect, the panel holds today that the Constitution requires Secret Service agents to subsume their duty to protect the president to their newly created duty to act like concert ushers — ensuring with tape-measure accuracy that everyone who wants to demonstrate near the president has an equally good view of the show.”  The other question of equal concern to the government in this case concerns the outcome if Secret Service agents are found liable and forced to pay damages for their use of force.  A natural consequence of this outcome could be agent reluctance to do their job accordingly for fear of future litigation, therein risking the safety of future presidents and the nation’s security.

Decisions by the SCOTUS on similar cases involving Secret Service don’t bode well for Michael Moss and the anti-Bush protesters.  Two years ago, the Court dismissed a case involving Secret Service agents who detained a man after he told Vice President Dick Cheney his policies were “disgusting.”  The justices’ sympathy for agents’ needs to move protesters in order to protect a government official may be convincing enough.

Here’s a great video from iSCOTUS summarizing the case:

We also enjoyed reading these articles from SCOTUSblog, The Washington Post, and materials on the SCOTUS website.

Decision Update:  In a 9-0 decision, a unanimous court found in favor of the Secret Service agents.  Justice Ginsburg wrote the opinion for the court with no dissenters.  Ultimately, the decision enforced the qualified immunity protection Secret Service agents have, which protects them from being sued for damages in civil cases.  The Court was clearly compelled by the swift and immediate responsibility agents have to secure any and all areas where a president is traveling.  While one group whose message may be negative in content is relocated the other group, with a positive message, may not be moved.  The speech wasn’t quashed by any agent of government, the speakers were moved.  The latter is in accordance with previous case law that permits time, place, manner restrictions on speech and it reinforces the issue that protecting speech is still important.  Ensuring that speech hits the intended target is not the responsibility of government agents.

For more details on the decision and a link to the opinion, check out SCOTUSBlogger Lyle Denniston’s write up here.