Futility. Making sense of both public knowledge and opinion of the third branch of government is an exercise in futility. Either people love to hate the Supreme Court or they know nothing about it. There’s no middle ground. I wrote about Court rancor two years ago when Pew Research Center released data from a survey taken at the end of a big term. The timing of the poll, rather the release of the poll results, struck me as convenient given the rulings on same-sex marriage cases Part I, affirmative action, and voting rights had come down three months before. It seemed poised to affirm conventional wisdom that public reaction to the decisions falls in either the “Love it” or “Hate it” camp. There is seldom any middle ground to the average voting age citizen. Follow that up with “What do you think of the job the Court is doing?” and the answers are an ambiguous “Meh…” or return to “Same response. Hate it.”Perhaps polling near the end of the Court’s term isn’t the best time to take the pulse on a branch of government whose approval rating couldn’t possibly slump as low as Congress’. (12%) Maybe asking right around now – late May/early June – would yield less judge-y, possibly more informed reflections on the “least dangerous branch” of government? After all, we’re weeks away from learning the decisions about same-sex marriage Part II, free speech on Facebook, fair housing, death penalty, and Obamacare; cases people have been following in the news and are stakeholders. Maybe? Nope. And here’s why. Pew Research Center recently released a 12-question survey to “Test your knowledge of prominent people and major events in the news.” At the end, you can “see how you did in comparison with a nationally representative group of 3,147 randomly selected U.S. adults surveyed online and by mail.” I took the quiz* and found the questions topical, timely, and was pleasantly surprised to see a question about the Supreme Court pop up. I immediately emailed this quiz to a man who is one of the smartest person I know, who also happened to be sitting near me at the time. This guy is protégé smart. He can spew facts from sources he remembers reading last year. I know this because I’ve enjoyed fact-checking him. His brilliance knows no subject bounds and he loudly prides himself on his expertise of current events. After taking the quiz, he shamefully yet apologetically appeared before me to share that he only got one question wrong. It was The question – the only question – he knew would boil my blood: “There are nine justices on the Supreme Court. How many are women?” With gaping mouth and sad eyes I turned to him and, before I could ask, he replied “Sotomayor. I forgot about Sotomayor.” [Audible sigh…] His admission, and the recognition of which Justice he forgot, absolved him but he’s a rarity. Most people, according to the quiz, do not know there are three female justices. This is bad. What is surprising and troubling is the percentage of people who got that question wrong (33%) compared to the number of people who correctly identified other questions, such as this one, that were seemingly way more challenging: 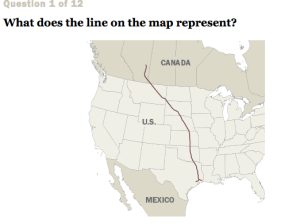 73% correctly identified it as the geographic line demarcating where the proposed Keystone Pipeline will be built. Or this question, about a graph that asks one to simply identify what national trend you think it’s reflecting:

72% got this one correct! Clearly I underestimate the brevity of knowledge people have about economic and environmental trends. Good on you, informed Americans. But what accounts for the continuation of a general lack of knowledge about the third branch of government? For years the joke has been Americans can name more Stooges and Fresh Princes than branches and Justices. Hasn’t exposure to news via web media – the great democratizing and educational tools we spend 5.6 hours a day using – made a dent in this civic deficiency? Maybe it falls back on me and other teachers who need to do a better job teaching the Supreme Court and lady justices. Or maybe I should just remind myself that people just love to hate the Court or remain committed to keeping SCOTUS in their cultural and civic blind spots. Either way… Blerg.